Skip to content
Alright, Christmas break is over. I’ve pounded back hundreds of cookies, squares, macaroons, assorted meats and alcoholic beverages. Every day it was harder to breathe than the last and for some reason my workouts are getting more challenging… weird… Anyways, now that most of the running around is over, I’ve managed to make a little bit of time to update this blog, as there has actually been a fair amount of progress on the GT6.

Ryobi – My Best Investment
For starters, big news I guess but I am saving up for a condo. I’d like to start commuting less so I can start catching up on some sleep. Although this is a very exciting time in my life, it’s also going to cut back on the budget on the Triumph which is something I wasn’t really hoping to do yet. Commuting to and from Woodbridge every day is taxing, so I’m looking at somewhere in Toronto. This isn’t the end of the world for the GT6 though, as most of the larger purchases are already out of the way. I plan on using this time to focus on the projects that take little money and lots of time, as you will see below. 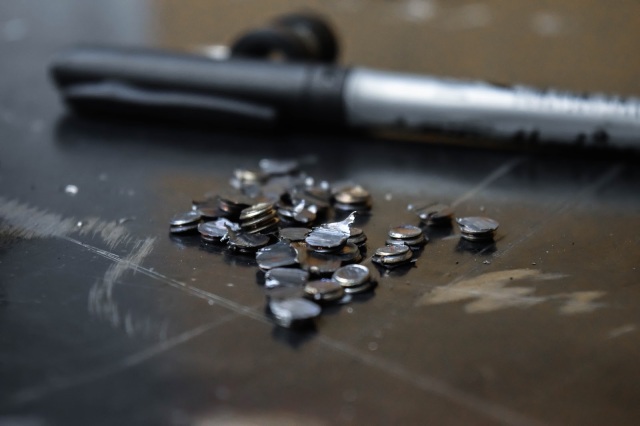 Shavings – Trimmed Stainless Bolts
Speaking of commuting, that in itself has been interesting to say the least. Not only am I stuck with a bunch of lunatic drivers cutting each other off on the entire stretch of the 400 series highways but my Lancer decided to be a real gem a couple of months ago and blow an amplifier. This also took out the entire front end of my sound system, which in its entirety fails to turn on now. I’m now forced to listen to music off of my cell phone, which means I am now also stuck with my thoughts.

Positioning – Lining up the P-Clamps
The mind is an interesting part of the body, it can equally create the most beautiful of utopias and the darkest of nightmares. 2016 was interesting year to say the least, with many new experiences – some good, some bad, but experiences nonetheless. The trouble with having all of this uninterrupted thinking time on your hands commuting every day is that you allow your mind to run free, which in turn allows you to develop outlandish scenarios and thoughts that you convince yourself to be truths.

Motivation – It Helps…
When focused and put to good use, this allows me to solve future issues or challenges and accomplish some goals before even starting them. With the GT6, this comes in handy as so much time I would have spent either at the shop or at a local coffee house solving problems, I’m forced to do on my way to and from work.

Elpartso Cartel – Brap Brap Brap
The mind is neat in this aspect.

Standards – Sometimes They’re Good
When unfocused and put to poor use, this allows me to dwell on the past, events that I’m not looking forward to and constantly deconstructing previous experiences to see where I have gone wrong, where to improve or just linger on what happened. These thoughts often become obsessive and distracting, the mind loses any positive direction and the battle with anxiety begins. 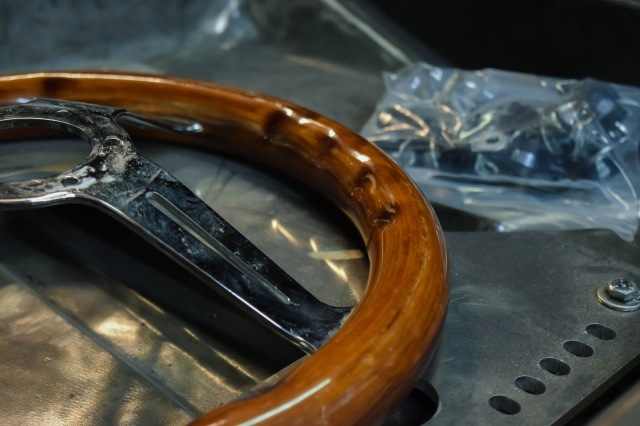 Classic – Wood Furniture
The mind is neat in this aspect.

Bonnetless – Showing the Goods
I try my best to stay positive and be productive.

Double Taste – I’ll Taste it Twice
Which brings us to this delicious shawarma pizza we see above, which good lord was it tasty! It also marked the end to one of the most uncomfortable projects on the GT6 so far… getting the fuel lines properly mounted to the frame. As conveyed previously, I used insulated P-clamps to mount the lines on the underside of the frame. This is fine and dandy with the exception of the work that is required to bolt these to the frame.

Connections – Fuel Lines Mounted
I had to mig weld nuts to the bottom of the frame, which seems like an easy task but that was about 25% of what actually needed to be done. First, the nuts needed to be stripped of their nickel plating on two of their faces and one of their ends to ensure a clean welding surface. Second, the stainless steel bolts that I purchased weren’t available in any shorter length. With both ends of the P-clamp, a lock washer and the thickness of the nut itself, the bolt was still a bit too long so I had to shorten each one by hand. Again, none of this would be an issue if I didn’t have to do this 25 times over for each bolt, nut, washer and clamp set I have for these lines. 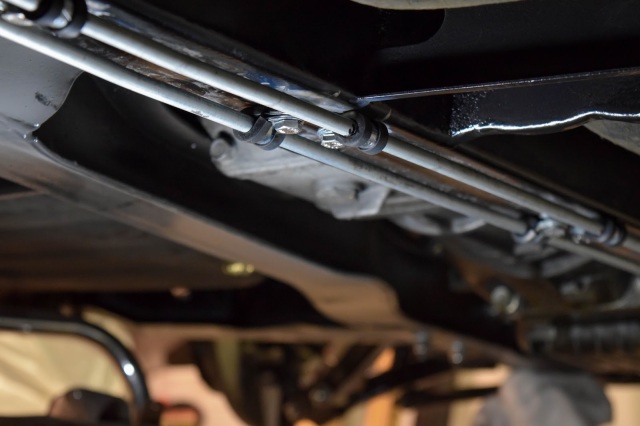 Lengths – Bolted in Place
Then there was actually positioning the lines and taking the extremely tough epoxy primer off of the frame so that I could actually weld these things. This was accomplished very carefully with an angle grinder a couple of inches off of my nose. High speed blending wheels spraying your face with primer dust directly above your eyeballs is a fun time if I do say so myself… right… Once the primer was off, I could actually use a marker to draw up where I needed to weld. 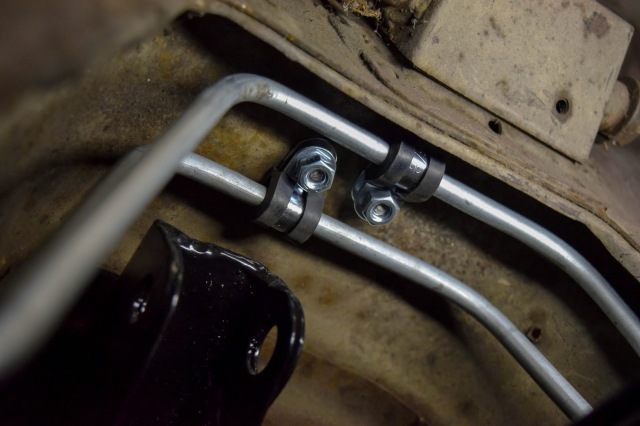 Wheel Well – Adequate Clearance
And then there is the overhead welding, under the frame of the car, which is not very high off of the ground. With lots of twisting, shouting, swearing, burnt skin and a ton of garbage welds, I somehow managed to get all of the nuts in position. While I’m not proud of the welding, all of the nuts are currently holding their own weight. Once the car gets completely disassembled again, I will be flipping the frame and tig welding all of the nuts instead.

Mockups – Marker Marks Marking the Required Marks
I had to make some adjustments to some of the lines but I managed to route them pretty successfully. I think I will still take some time to get them 110% but I’ll worry about that more once the nuts are properly welded to the frame.

Jungle Gym – Bendy Lines
Since the route I chose connects the lines to both the frame and the body which are obviously two separate entities, vibration and flex is something that I am concerned about. I fear that excessive vibration will cause the lines to eventually fatigue and crack. In the picture above, I plan on sectioning the line into two pieces, flaring the ends of the lines and reattaching the lines via rubber fuel hose to absorb any vibration or flex that the lines might have otherwise seen. This will be an effective mitigation of risk and should eliminate any potential issues.

Regulator – I Don’t Even Know What I’m Doing
One massive benefit to all of this work is that most of it was done with ear muffs on, which is surprisingly blissful considering the work that I’m doing. It’s a bit of an escape, not necessarily in a “vice” sort of way but rather allowing my mind to focus on what all of this means to me.

Ground – Exposed Metal
I’ve mentioned it before, the GT6 has transformed into much more than just a car to me. It’s always difficult for me to describe my exact thoughts or feelings towards something, as I usually become a stuttering mess but this car has taught me so much. The Triumph has taught me how to stay dedicated to something that I care so much about, it has restored my tarnished beliefs on the rewards of hard work. All of the effort, the money, the hard work, the long sleepless nights, every second that I have spent on this car, I can happily take a step back and smile.

Feed and Return – Trunk Lines
I don’t care that it’s multiple colours, I don’t care about the dings, the dents, the scratches, the missing pieces, none of that matters.

Rear End – Tucked Away
All of it is worth it. 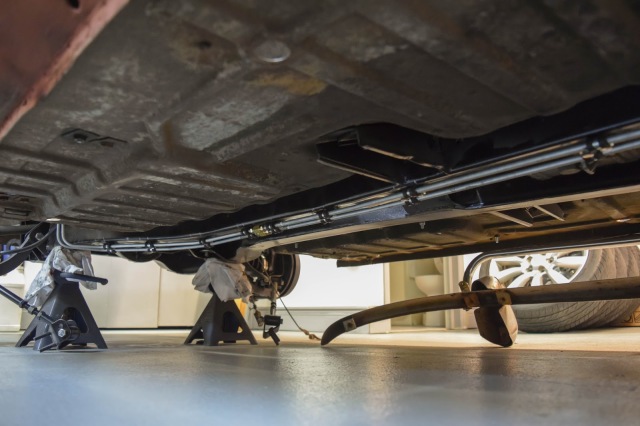 Full Length – Feed and Return
All of it is a reflection of my efforts, my beliefs, my thought processes, my definition of art, of beauty. The Triumph is one of the few, if only, canvases that I can happily say I have no issue expressing myself with. 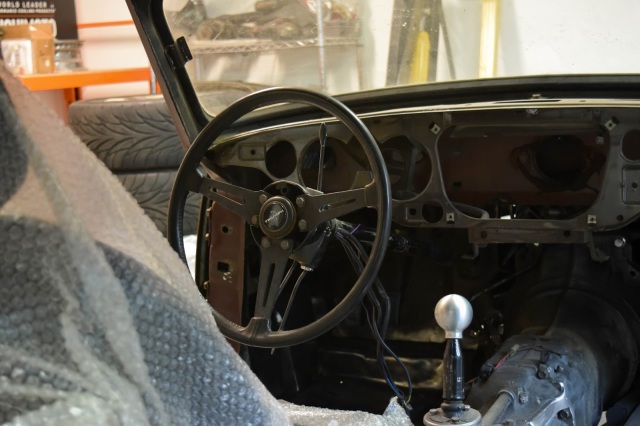 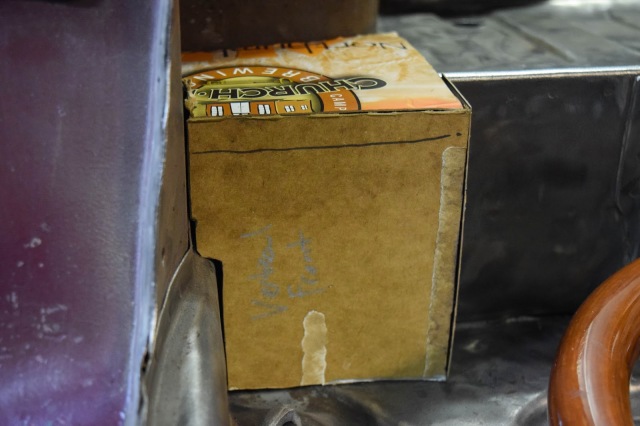 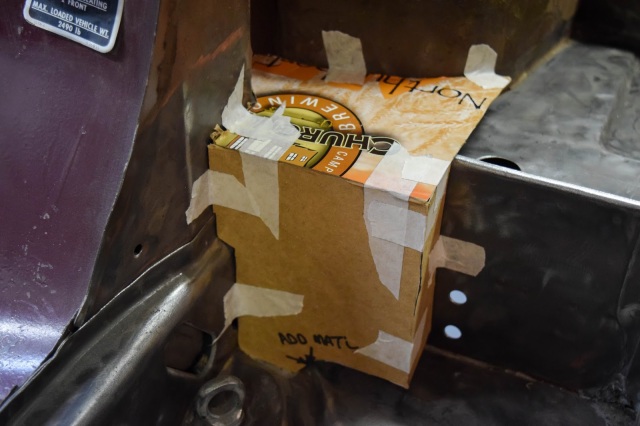 Cardboard Bits – More Beer?
What more could you want in life? 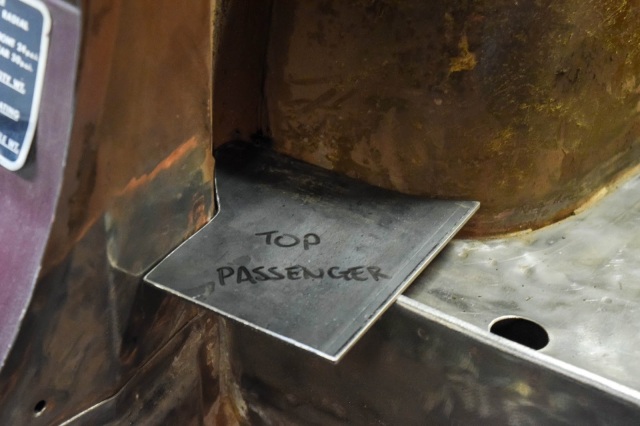 Top Passenger – Primary Plate
Maybe an awesome roll bar to rock some filthy OMP 6-point racing harnesses from? Okay, maybe that’s a fair want. I started cutting and grinding some steel last week to mock up the primary boxes for the main hoop of the roll bar that I am having Mitch and Joe bend for me. Strong boxes are essential for a strong roll bar or roll cage, ensuring that the steel doesn’t blow through the floor pans and kill not only you but your passenger as well. If not constructed properly, roll bars and roll cages can add significant amounts of danger to a vehicle. Play it smart, play it safe. 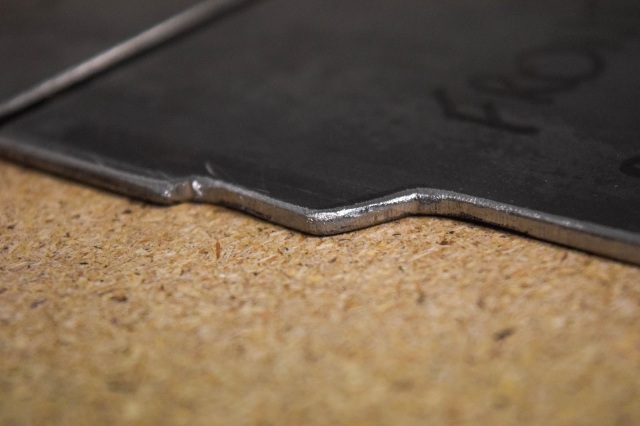 Ground – Inhale That Dust
I’ve selected my materials and will be building my roll bar to Canadian Automobile Sport Club (CASC) specifications, ensuring a proven, certifiable and ultimately safe design. There is absolutely no point in half-assing a project such as this, as you’ll be adding unnecessary weight to the car for coolcarbro points and ultimately get made fun of my everyone who knows anything about proper cage construction.

Mock-Up – Box Aligned
Much the same as the engine mounts, I used cardboard stencils to start the mock up, traced onto steel and worked my magic on the angle grinder. After lots (and I mean lots) of test fitting and cutting, I ended up with a shape that I was happy with.

Tacked In Place – Primary Boxes
The first box proved to be a bit of a challenge as there is a fair amount of geometry to overcome. With a bit of patience and lots of error, I managed to tack three pieces of steel together to make something that looks somewhat like a box. I test fitted the box inside the car and it fit like a glove. 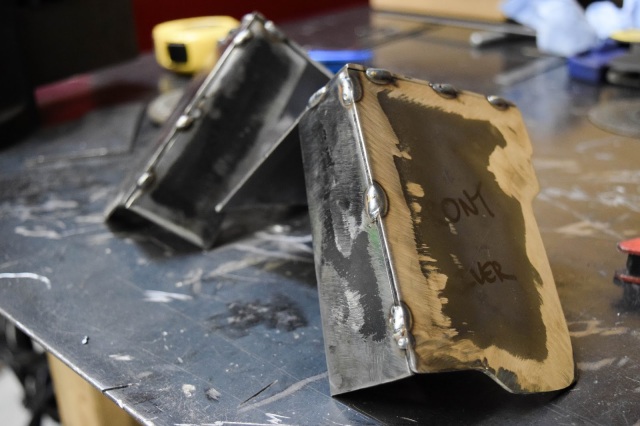 Detail – Messy Tacks
This made my life significantly easier on the second box, as all I had to do was simple tracing, cutting, grinding and welding. An hour into the second box and I was done. As with the first box, I test fitted the second box in the car and smiled. We’re good to go. 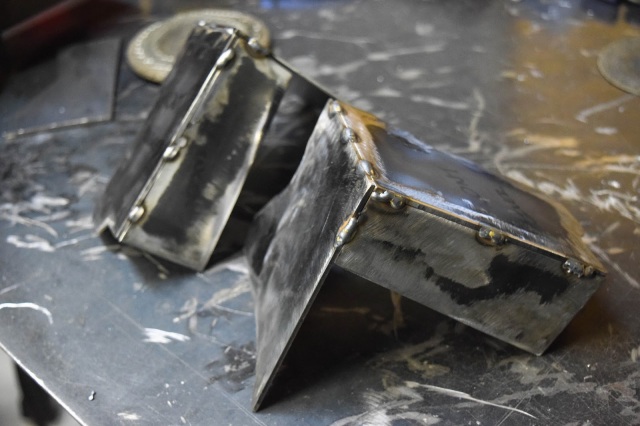 Detail – Mill-Scale Removed
The rest of the night was spent helping Mike with fitting a 13b Peripheral Port rotary engine in his Mazda Miata. Although it needs an angle grinder, that is something that the two of us will be working on in the near future. John and Brittney joined us later on that night as well which proved to be a great opportunity to spend time with each other. These are really exciting times in our automotive world and I can’t wait to continue working on the Triumph. 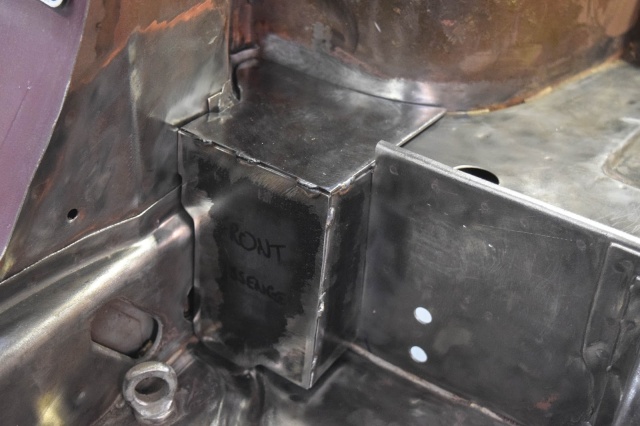 Passenger – In Place
All that was left was sweeping, vacuuming and eating a ton of sushi.

Driver – In Place
We did all of the above. 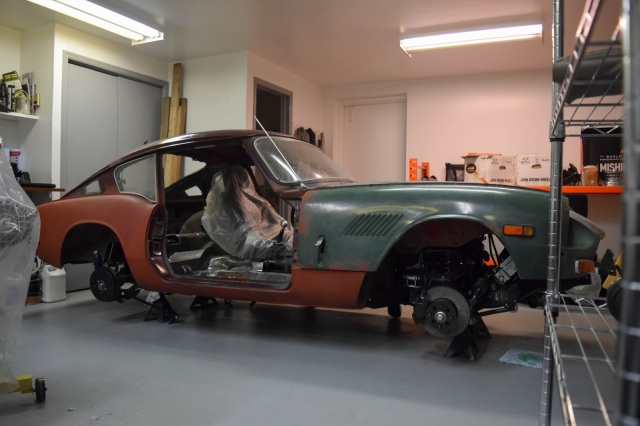