Skip to content
First off, I want to give an apology for not updating the blog for such a long period of time. There has been so much going on in my life the past couple of weeks its been hard to stay focused on this project. Most of my free time recently has either been spent with family or at the shooting range to relieve some stress. It’s been a difficult month. With that being said, I have managed to invest some time into the Triumph, even if it has been only a little bit. 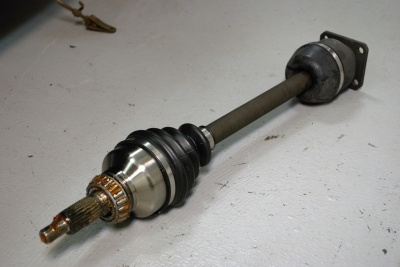 Canley’s Classics – CV Driveshaft Kit
I’ll start with probably the most exciting news among Triumph GT6 and Spitfire enthusiasts/owners – I’m now the proud owner of a Canley’s Classics CV driveshaft kit to replace the original Rotoflex rubber donuts on the GT6. I’m very happy to report that the kit is well worth the price tag attached. Everything about the driveshafts is very robust, accurate and well designed for easy assembly onto the vehicle. With that being said, there are issues with my vehicle that have put a delay on finishing the installation of the driveshafts.

Test Fit – Driveshafts Fitted
Right before purchase of the kit, Mike and I were discussing the details and price prior to pulling the trigger. The discussion of wheel bearing end float came up when we found the note on the Canley’s Classics webpage that highlights the importance of shimming the hubs correctly to allow for the proper spacing between the wheel bearings. I really didn’t think much of this at first until I started reading into the factory service manual that describes the proper setup on the car. 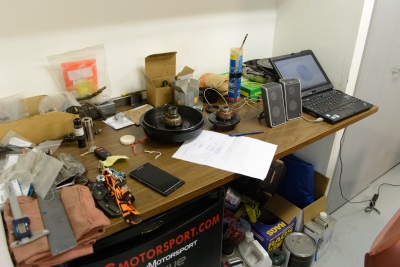 Setting Up – Measuring Hubs
The service manual outlined the shims required for proper spacing. It specifies one .150″ shim with a maximum of two additional .003″ shims stacked on top of that. From dis-assembly of the hubs, I found that the passenger side had all three shims (.156″ total), where the drivers side hub only had two (.153″ total). The .003″ shims pretty much self destructed upon dis-assembly, therefore requiring the purchase of new ones. Not wanting to purchase new ones, I figured it would be a lot easier to just get single piece shims made for each side so there’s no need to do all of the measuring or setup again. There’s only one problem with this idea – the previous owner of the car machined the back end of the hub so even with all of the required shims from factory, there would still be a huge gap. This sucks.

Measured – Dry Measured Hubs
So here’s the new idea to fix all of this. Today I took some time at the shop to measure up the two hubs to get the required dimensions for the new spacers. Measuring the seated wheel bearing on the hub, the overall length and the machined length I was able to run a quick calculation to find the difference and get the length I need. A spacer with a length of .826″ will be made this week. After that, the driveshafts will be installed. Once more task down.

Detail – Brake Drum Removed
I finally ended up finding a driveshaft for the car. The guy was local and the price was right. Mike actually purchased it for me as the same guy was purchasing parts off of him the same night we were going to meet up. I got caught in traffic so he was kind enough to pick it up for the time being. I promptly dropped it off at Harman’s in Ayr for the modifications required. I will be keeping the slip yoke and main length of the Miata driveshaft, while retaining the GT6 rear universal joint to bolt up to the differential. Hopefully it will be done within the next couple of days so the driveline can be finished up. 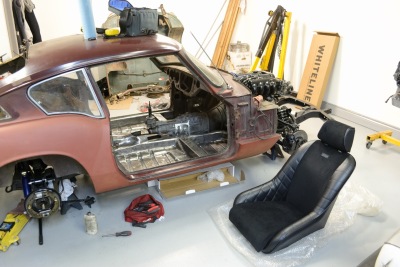 Set Up – Measuring Seat Mounts
I also started drafting out a transmission mount. After going through my spare parts, I found that I had a spare set of sway bar bushings, as I initially purchased the wrong ones (I have an MK-III sway bar, where I thought it was the original MK-II). This presented a perfect opportunity to adapt one of these bushings for a transmission mount. The design is penned out on a piece of cardboard and it is awaiting material to get it rolling. More on this later.

Modeled – Custom Seat Brackets
While measuring up the shims for the wheel bearing end float today, I also took some time to design seat mounting brackets for the OMP Brands Hatch seats that stare into my soul every time I visit the shop. I’m dying to get these installed. The idea behind the above model is to have a 3/8″ thick piece of material water-jet cut to adapt the seats. I’ll likely be getting a rough cut this week to test fitment. Once again, more on this later. 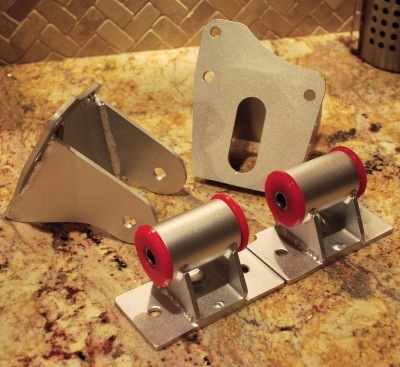 Motor Mounts – Finalized
The final update for this blog post is the motor mounts. I added reinforcement plates in between the two arms to ensure the motor stays planted and nothing breaks. The mounts are painted with high heat silver and the new bushings that I ordered are installed. They’re pretty – I’m happy with them. Unfortunately, I had to notch the reinforcement plates upon installation to allow for some additional clearance that I didn’t account for. They’re going to need to be put in the blaster and repainted. At least I got a photo before refinishing.
Stay tuned, there’s lots to come.
– Sean