Skip to content
I’ve been working endlessly all week on this car. I literally come home from work, get changed and head down to the basement. If I’m tired, I’ll stop by Brown Dog before I come home to get a delectable drink for a kick of caffeine. I’ve been trying to get this differential back together for quite some time now so I can reassemble my rear end. From my last post, I had the entire thing reassembled and I had some issues with it. After thinking for a couple of days, I realized that the play that I had in the pinion bearings would have been fixed by bolting the drive shaft flange to the pinion and tightening everything up. My shims were fine, my assembly was fine but my brain wasn’t functioning.

Pinion Detail – Organization is Key
However, this turned out to be a good thing. I tore the entire thing apart and gave it a proper clean, re-seated the bearing races and decided to make it look nice. Once I had the housings torn apart, I de-greased and masked away. I’ve had issues with removing the bushings out of the rear housing for a while now. Press fit is an understatement, those things were practically glued to the housing. My dad and I worked on it a little bit more a couple of nights ago. He managed to use a saw blade to slot the bushing and hammer it out which worked like a charm. Now the real issue was getting the new ones back in.

Bust out the Grease – All Lubed Up
Bushings are a pain in the ass to put it simply, especially rubber press fit ones. However, I had a trick up my sleeve which worked pretty well. I took the rear bushings for the housing and threw them in the freezer for a couple of hours. After waiting around and prepping everything a little bit more, I used the same bearing heater I used for previous bearing installations to heat the diameter on the housing where the bearings were to be installed. I hoped to expand the differential housing hole and contract the bushing itself to give me a little more allowance when press fitting them in. It was still a massive pain to get in but I used a piece of square tubing to extend the arm of the vice I was using to give me some more torque.

Tight Fit – Even After Lubrication
After many unsuccessful attempts, I was finally able to get new bushings installed. Next came the fun part – making it all pretty again. I masked up any mating faces to ensure that everything still reassembles properly. The Tremclad was taken out and slathered all over the front housing. It should be noted that the paint I am using is oil based so unfortunately it takes a full 24 hours to dry between coats. A weeks worth of work on this has enabled me to give the front housing three full coats and the rear one coat as I just finished the bushing installation and cleaning today. Needless to say, they look awesome so far. 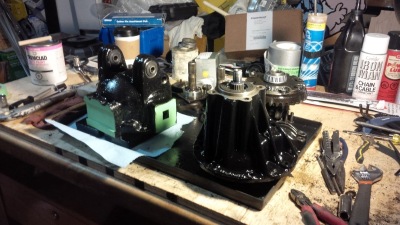 Shiny Shiny – Painted Housings
I’ve also purchased a dial indicator and a shop press to make my life easier. The dial indicator I am using to measure vertical pinion movement once the assembly is torqued to the correct value. It is supposed to have .000″-.001″ worth of play so there’s not a lot of room for error. I’m confident though, I’ve made it this far – I’m sure I can make it a little further. .005″ of backlash is also required, so the dial indicator will be used for measuring that as well. Even though it has been a headache, this differential has taught me a ton already. The knowledge and experience gained by doing all of this is always invaluable. Plus, rebuilding this by myself saves me $1300 USD as opposed to purchasing a refurbished unit.

Leaf – Bushings Installed
The shop press I picked up has also allowed me to install the new leaf spring bushings. The diameter that the bushing is supposed to fit in is far from a perfect circle – it’s more like an oval, so getting the bushing in by hand is near impossible. It took me a little while to balance the spring on the little platform of the shop press but the bushings went in surprisingly easy. Both the hole and the bushing itself were greased prior to installation, the same can be said about the differential bushings. Unfortunately due to the time it takes between coats, I can’t see this differential being put back together for almost a week. The rear housing still needs two coats of paint.

Rear Housing – First Coat of Paint
Admittedly, these pictures are all garbage quality. The lighting in my basement is so poor I can barely see what I am doing down there half the time. You can take my word for it though, the differential is going to look absolutely incredible once it is reassembled and mounted on the frame. Speaking of which, I should mention that the idiot that I was going to buy those used R888 off of is… well… an idiot. I won’t be getting those tires after all, so the cost of the project is back up to where it began. Oh well, can’t win them all. More to come soon, thanks again for following my blog and keeping up with this restomod project!
– Sean