After many weeks of waiting for enough funds to justify spending $250 on some primer for the frame, I decided to bite the bullet and get cracking on the car. I purchased my epoxy primer from Doug Kennedy, he’s the go-to-guy for everything from Southern Polyurethanes Inc. in Canada; the company that manufactures what is supposed to be one of the best epoxy primers you can buy. After two patient days of waiting; I received the primer, purchased a spray gun, furnace filters, tarps and tape from Canadian Tire and headed back up to Waterloo. 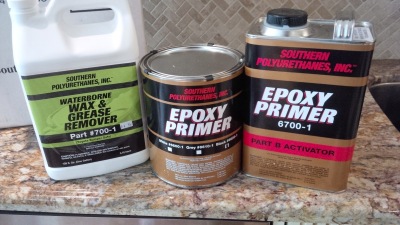 SPI Primer, De-greaser – Said to be the Rust Beater
Although it happened a little while ago already, this day was the day I have been long dreading; taking my frame with 44 years of filth on it and stripping it down to bare metal. After a quick trip to Home Depot to get an angle grinder, wire wheels and a blending disc, I suited up and got right to work. Six hours in the cold, and I returned with a relatively clean frame. The previous owner of the car notched the frame (insert Volkswagen stance reference here) to fit a first generation motor. It wouldn’t stop bothering me. I cut some metal, fitted it, had Joe weld it for me (I didn’t have access to a welder, and he said his takes years of experience because of how crap it is) and blended it in. I was quite happy with the result. Additionally, I noticed two large stress cracks in the frame where the motor sits, Joe welded those as well for me. You can’t even tell that they were there.

Welded Back Up – Joe on the Welder 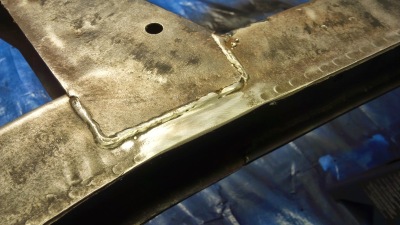 Smoothed Out – Will it Blend?
I was tired so I called it a day, had some sleep and came back another night to de-grease the entire frame using the SPI grease remover I had purchased earlier. The frame took two hours to fully de-grease. While it dried, I mixed my epoxy primer as it has a 30 minute activation time before I can effectively spray it. About an hour after de-greasing, I aired up, wiped down, curtained up and set on my mission that would come to a quick halt in about an hour. My makeshift paint booth consisted of an exhaust fan used for dyno tuning attached to a furnace filter for over-spray control, as well as a second air filter on the other side of my tarp for make-up air. It was cheap, garbage, but worked incredibly well for what I needed from it. 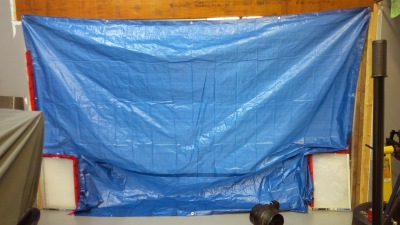 Pure Crap – Makeshift Paint Booth
I dry sprayed the paint gun to remove any excess oil in it from assembly so I wouldn’t get any fish-eyes in the primer, filled it up with some expensive liquid and got to work. Unfortunately, even after my extensive de-greasing, the front of the frame where the engine sits apparently had some light oil embedded into the metal so I did get minor fish-eyes towards the front. However, nothing that suspension components, brake lines, uprights and a motor won’t cover up. 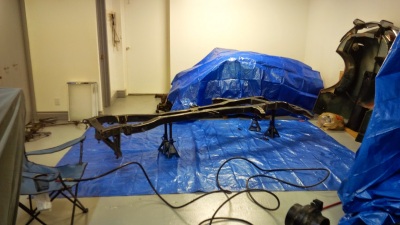 All Set Up – Almost Ready to Go
After my first coat of primer, I decided to go outside to get a breath of fresh air. Although I was wearing a respirator, it’s always a good idea to get out of the booth in between coats. I put a layer of primer onto the suspension uprights as well. Here’s where the fun begins. Not wanting to be constrained by anything while I sprayed, I took everything but my cell phone out of my pockets, including the keys to the shop. I always lock the shop doors while I’m working due to music blaring so loud that I can’t hear if anyone comes into the shop. This would be fine if the door handle going into the shop unlocked the twist-lock contained in the handle itself when you use it from the inside. Unfortunately for me; it didn’t. 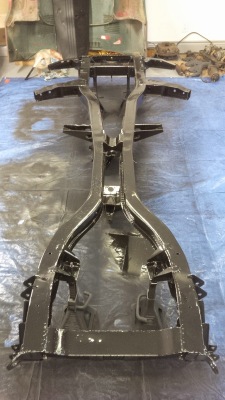 Smelling Lovely – First Coat of Primer Down, Two to Go
So I’m stuck locked out of the shop, with primer waiting to be sprayed. It’s already around…. 10:30 pm at this point? Keep in mind I need to be up at 5:30 am for work. I called my dad and I called a locksmith. Again, my good fortune struck. My dad came to my rescue, unlocked the door with ease (I swear he must have been a lock-picker when he was younger, he had the door open in 10 seconds flat) and I was able to continue working. However, the locksmith still showed up (he tried calling my dead cell phone many times) and I had to pay for the service call. I continued to work regardless of my frustration. It’s about 11:30 pm now… Two more coats to go. 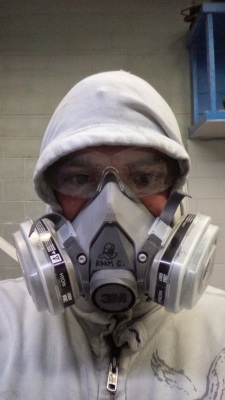 PPE’d Up – What do we Need to do, Mr. White?
I ended up finishing at around 1:00-1:30 am, after primer, cleanup and breathing breaks. I let everything sit for a week as per SPI’s recommendation, came back and removed the tarps, organized the parts all cool-like again and promptly took some photos. The primer sprayed like glass, cured beautifully and is extremely strong. I would offer my recommendations for it now, however a long-term driving test will be a better indication of how effective it is against abrasion, wear and rust. The frame was painted back in October already, I need to start remembering to update this. Work will continue to be slow for the next little while as I convert my old car back to stock. Still love the result though. 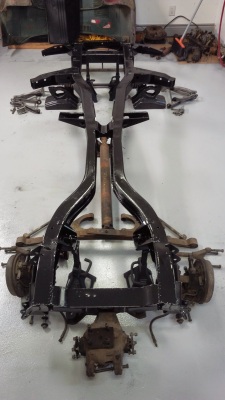 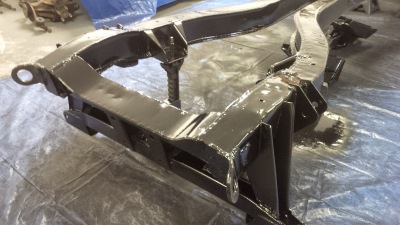 Glossy-Gloss – Primer Sprayed Beautifully, Accenting the Flaws in the Frame 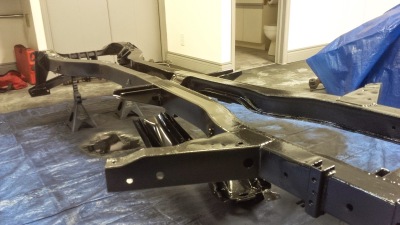 Slight Fish-Eyes – Will be Covered Up 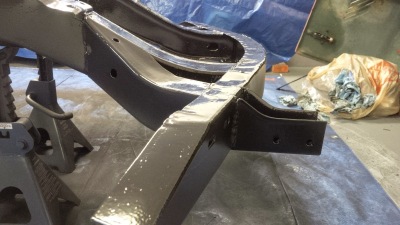 Silky Smooth – Better than any Epoxy I Have Ever Sprayed
Cleaned the floors, and this is how I left it: 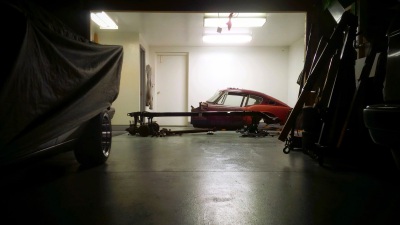